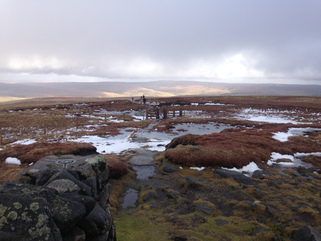 Great Shunner Fell is one of the highest peaks in Yorkshire, higher than Pen-y-ghent, and with fantastic views from its wild moorland plateau.

If this sounds daunting, why not join us on this walk which uses local minibus transport from Hardraw, enabling us to complete a linear walk from the highest road point almost half way up the fell. Not usually an option due to lack of parking and regular public transport, this allows us to reach the summit using a much shorter route with far less ascent than the traditional approaches but all the sense of achievement and wildness.

As a bonus, our starting point is the must-see Buttertubs, a bizarre geological feature high on the pass currently gaining fame as a highlight of the 2014 Tour de France Grand Depart.

From Buttertubs we cross wild moorland (being prepared for some boggy areas!) on a noticeable but steady ascent to the summit. We’ll enjoy a well-earned rest at the summit shelter whilst admiring the expansive views.

The good news is we’re now on the Pennine Way, so not only are we sampling a section of the UK’s oldest long-distance trail but there are also good sections of constructed path through those boggy areas! Our descent is longer than the route up, but aside from one or two short sharp sections is surprisingly steady. This takes us all the way back to the hamlet of Hardraw in Upper Wensleydale, home of England’s highest single-drop waterfall, not to mention welcome refreshments in the remarkable 13th Century inn!

While much of this route is on good paths, there is an area of boggy peat hags so good walking boots should be worn (with gaiters highly recommended!). We are also crossing exposed high moorland throughout the walk where the weather may not be the same as the valley. Waterproofs and spare warm layers, hats and gloves should be carried at all times of year.