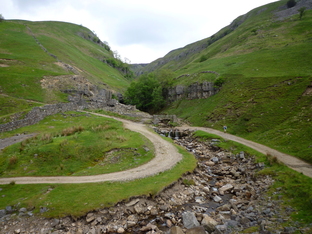 One of the most picturesque walks in the Dales – and with some of its most iconic views! If the phrase ‘Yorkshire Dales’ conjures images of glorious wildflower meadows and rustic stone barns in beautiful remote valleys, this is the walk for you. However, it may surprise you that this very same valley was actually a hive of industry until the early 20th Century and tucked away in the valley sides is evidence of extensive lead mining operations… plus one or two other secrets!

Starting from Muker, we take a lane through picturesque countryside down to the riverside path leading to Kisdon Force waterfall near Keld. From here the path rises a little up the hillside and we come to the ruins of Crackpot Hall, a former residence with one of the best views in the Dales. We soon come to Swinner Gill and explore its depths to find the lead mining remains and hear about the intriguing Swinner Gill Kirk.

Traversing the other side of Swinner Gill we return to the main valley and join the riverside path. The spectacular wildflower meadows greet us in summer and lead us back to Muker where we can seek refreshments at the Farmer’s Arms and visit the collection of small shops featuring local arts, crafts and gifts.